The Alaska State Capitol houses the Alaska State Legislature and the offices of the Governor and Lieutenant Governor. Constructed of concrete, brick, and native marble between 1929 and 1931 on land paid for and donated by the citizens of Juneau, the Federal and Territorial Building was dedicated on February 14, 1931. The federal government gave the building to the newly minted state in 1959 to be used as a capitol building. The Alaska State Capitol is one of the few state capitol buildings that does not have a dome and the only one that was not built for the purpose of being a state capitol.

The Legislative Budget and Audit Committee (LB&A) is one of the three permanent interim committees of the Alaska State Legislature that have the ability to take action during both session and interim. LB&A was created in 1955 to provide the Legislature with fiscal analysis, budget review, and audit functions. In 1980, the committee also became responsible for monitoring the lending and investment activities of the State of Alaska. Much of this is fulfilled through the work of the two permanent staff agencies established by statute that report to LB&A, the Legislative Finance Division and the Division of Legislative Audit. This statutory construction allows the agencies to carry out their duties independently and in a non-partisan manner while providing the services required by statute.

LB&A has the authority to hire consultants to educate and inform the Alaska State Legislature and the public on a variety of issues that are important to the State of Alaska’s budget and economy, including oil and gas, state revenue options, education funding, and wages and benefits. 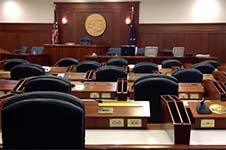